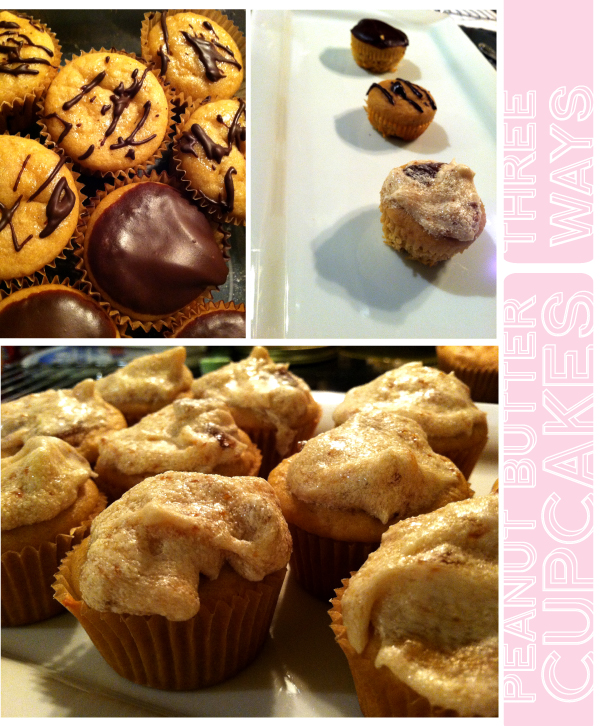 Are you sick and tired of having only one way to enjoy your peanut butter cupcakes?

Are you tossing and turning night after night, wrestling with the idea of settling down with just one peanut butter cupcake topping?

Stop! You don't have to settle for another sleepless night!

Because you deserve it.  And cupcakenogomy is dead. 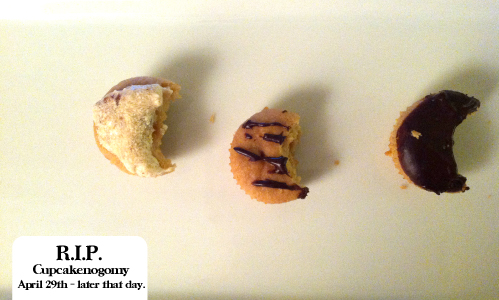 So that was weird, huh? I mean, all I've had for dinner tonight is cupcakes, 1/2 cup of edamame, and a yogurt and while that may seem like the perfect meal - it very much is the perfect meal and you were right for thinking that. My hands may be shaking? I can't imagine any correlation. Is this the danger of eating around? I should have used protection.

Let's get on with the deets...

Do as I say
Preheat the oven to 325. Line a mini cupcake pan with some mini liners. This recipe makes three and a half dozen mini cupcakes. Get ready to be overwhelmed.

In a medium bowl, whisk the protein powder, oat flour, salt, and baking powder. Set aside.

Beat the peanut butter with the truvia with an electric mixer until well blended. Add the applesauce and beat it like Chris Brown just caught it with another cupcake. (Too soon? Too nonsensical?) Mix in the vanilla. Mix in some of the dry mixture followed by some of the milk and continue alternating, finishing with the dry ingredients. Mix until fully incorporated.

Fill your mini cupcakes about 2/3 of the way full (here's where you can add some chocolate chips in the middle if you want) and pop in the oven for 12 minutes. Take out, let cool, repeat a half a million times.

Now let's get on with the cupcake swinging...

Get on with it
Using an electric mixture, beat the vegan butter on high for a bit. Then add the confectioners sugar and beat until it incorporates. Beat harder and faster (teehee) to fluff it up (teeeeeheeeee). Add the splash of milk and the jam. Beat beat beat beat until you're happy with it. Spread it on the cupcakes. Devour the cupcakes.

Take the lazy way out
Get the butter and milk in a bowl together. Pop it in the microwave for a minute. Mix it. Add the chocolate chips and stir until smooth. Take your spoon and flick the ganache across the cupcake top like a masterful artist who's probably a little lot drunk hammered. Enjoy your delicate work of art. 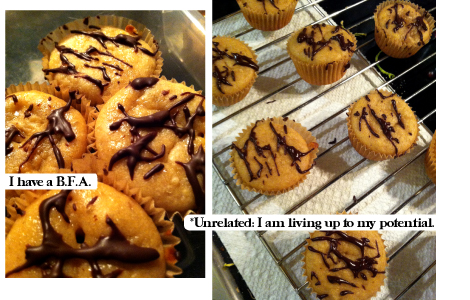 Option 3: Chocolate Smothered Peanut Butter
Using the same ingredients as above
Dip your mini cupcakes top down into the bowl of ganache. Swirl a bit and set it on a cooling rack to set. Refrigerate to harden. Make sure to get chocolate all over your face and hands and face some more when you lose all self control and eat these like a savage animal. Yum! 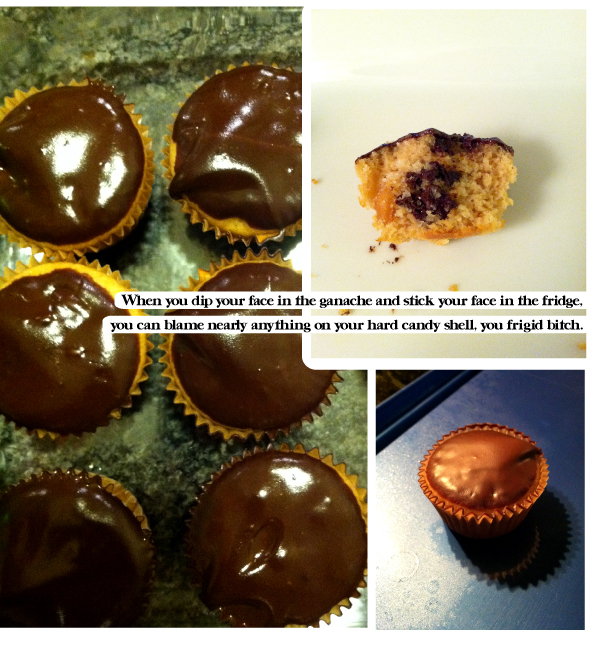 So there you go. Three different options for your indecisive needs. And if you need more than three, you're just a sick fuck.

TASTE: 5/5 These cupcakes are so very good. Each option is a winner. And my love for bite-sized goodies is undeniable. If anything, the vegan substitutions in the batter elevate the taste and consistency. The cake itself is perfectly peanut buttery and the little crunches of peanuts are stupid good. Creamy peanut butter is for pussies and WonderBread. And you don't look like WonderBread to me...

EASE: 4/5 Vegan recipes are just oddly easy, if you ask me. Everything is so...soft. And when there's nothing in the batter that can cause you crippling stomach cramps if eaten in its raw form, it's also incredibly easy to taste as you go and adjust to your liking. And I like to pretend that it's healthier too. It's like taking a completely non-violent action to a bird with two stones! I think!

FILTH OF THE KITCHEN: 5/5 I'm just going to burn it down and start fresh. I think I have peanut butter and/or jam in my hair. I'll just shave my head. It's fine. I want to move on from this forever.

DID THE DOG EAT THE DOUGH? The dog woofed at me at one point because he realized it was 1am and I hadn't taken him out yet. Then I was all like, "Frank, shut the front door." And that confused him enough to convince him to go back to bed. (I'm pretty up to speed with my dog's mental capacity.) I think he's hibernating.

IMPRESS-O-METER: 4/5 If I've said it a million times, I will now say it a million and one times: vegan baking earns you street cred. Sure, it's a street that's gentrifying more and more with each passing second but it's also a street. And you cannot get cred anywhere else. Also, I hear they just opened up a new coffee house that serves one no-frills-back-to-basics brew in hand thrown mugs from a Polish grandmother's open-air studio that used to be a whorehouse. It's also fair-trade. It's pretty legit.

It's me! Molly!!
I'm a little fake redhead and I never wear pants when I cook and/or bake. It's pretty normal.